fool who shouldn’t walk the line

[This is meant to be hummed/sung as an exploration
of the blues through an omniscient narrator.
Think Pink Anderson, J.D. Short, Otis Rush, Sonny Terry]

Through the screen of a window, the sun shines brightly
illuminating leaves small and still dangling
from branches reaching far above the lazy streets.
Suddenly, a sweet female voice shouts with fury
to confront a gentleman whose tone’s so raspy.

Their argument resembles the blues
if two voices could be used
to show how emotions
can lead to such confusion.

The gentleman sways his body weight to the other side,
flings his arms up, then loudly declares,
“Now, now, now don’t go chasing me with your insanity
just cause you couldn’t come to that party,
though I won’t deny seeing you then would have been mighty nice.”

To which the woman responds with an extraordinary howl,
“Don’t you dare try that move,
I hear about what you’ve been up to.
It’d be best to use less trickery
so I don’t keep feeling like such a fool.”

With disbelief, the gentleman replies,
“I wonder why you act so funny
but your words show me you misread
why I have to go run and hide.
I guess you don’t, no, you don’t know much about me.”

The woman can’t help but laugh with a bit of surprise,
“Honey, hasn’t there been enough time spent
reflecting on our likenesses?” Even as he nods his head,
with pity she says, “Don’t talk to me
like I’m a fool who shouldn’t walk the line.”

When the gentleman pauses, his eyes widen
and jaw drops so he can express,
“This only proves what wasn’t meant to be.
Damn, now I see what woes may come
in more forms ’an one by over thinking compatibility.”

Hidden behind her hands, the woman gasps incredulously,
“I can’t believe I wasted time
helping you find comfort in being divine.
Oh, why does this happen
whenever I help minds of a new light?” 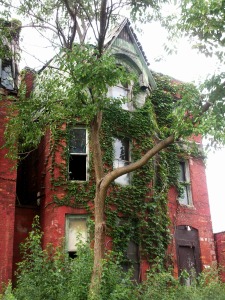 All of a sudden a car in the distance
screeches noisily to a halt
but the two continue bickering
as though nothing happened at all.

Before the gentleman opens his mouth,
he points to the smoky scene,
“Maybe that’s a sign you ought to consider
in saving some of that energy.
Yea, you may want to learn how to use that energy.”

This makes the woman cringe and reply abruptly,
“You take and take but stand without
any respect for my universal love.
So silly, oh, so silly to think
you’d be there in my time of need.”

Stomping her heel against the ground
making cement seem quite hollow,
she advised him, “Send me no more temptations
to things you know I like to doing.
Time enjoyed was heaven sent, was it ’cause I’m such fool?”

The woman repeated, “I said the time enjoyed was heaven sent,”
then the two said in unison,
“And I’ve met the self I’ve suppressed for so long.
Maybe you’re the reason why
it’s easy for it to be hidden and found.”

between characters, scribbled then transcribed, senses in tune, with a bit of rhythm
emotions, expectations, friendship, frustration, isolation, memory, mental peripherals, music, nature, respect, the other, the self, thoughts, time