I got doughnuts the other night before what seemed like a musical love child of the E.T. soundtrack and songs of Oompa-Loompas. T was interested in the musician who was not only performing but put the whole thing together at a place called Ham and Eggs downtown.

It came after checking out Chisme y Queso put on by members of the Center Theatre Group. The experience entailed improvisational skits inspired by chisme, which means gossip in English, written on the back of promotional coasters by people in attendance of a quaint bar in Boyle Heights. The reward for the most tantalizing bit included tickets to a showing of Into the Woods, bottle of wine and a gorgeously giant wheel of cheese (one of those that can be easily melted over food and more conveniently consumed in slices cut straight from the plastic casing).

After a few rounds of applause-influenced evaluation for the winner, D won the prized package of goodies with his poignant piece of chisme. Unfortunately I missed the reenactment of his writing because I stepped out for a cigarette with T and was lured to dance in Mariachi Plaza by an elderly woman. She was dressed in a turquoise blouse, eggshell cardigan, denim shorts and comfy brown leather boots. It was like my spirit animal could tell the smoke was a mere distraction from being enticed by cumbia blaring from a stage that held a modest dj 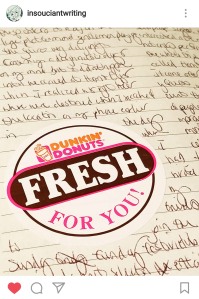 stand. Moving the crowd to dance from the stage was a short bearded man with a knack for strumming his güiro.

When we returned to Eastside Luv, we caught the last round of chisme and participated in the judging the winners of previous rounds. While D won the main prize, second place went to V, which was an inevitable consequence given his fantastic talent in storytelling. I don’t even think my story bit was pulled from the large plastic container holding everyone’s pieces of gossip. It didn’t matter. My mind was on doughnuts and I knew Ham and Eggs was just two storefronts down from a Dunkin Donuts. After a slight detour of foosball and some more dancing, we left Boyle Heights and concluded the night with a grand gesture of solid carbs.